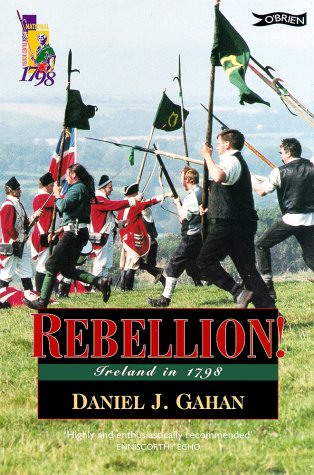 Rebellion! is the authorised book of the National 1798 Visitor Centre, Enniscorthy, Co Wexford. It includes re-enactment photographs of the 1798 battles. In 1798 thousands of Irish people, Catholic, Presbyterian and Anglican, rallied under the banner of the United Irishmen for one of the bloodiest revolutions in Irish history. Three separate rebellions inspired by the ideals of American revolutionaries and French republicanism swept across Ireland and nearly succeeded in securing Irish independence for the United Irishmen.

Rebellion! sets the events of 1798 in their broader historical context and explains how the rebellion changed the course of Irish history forever. It tells the story of the people, the politics and the battles of a revolution which, though short-lived, caused huge loss of life and destruction of property, and left a bitter legacy in its wake.