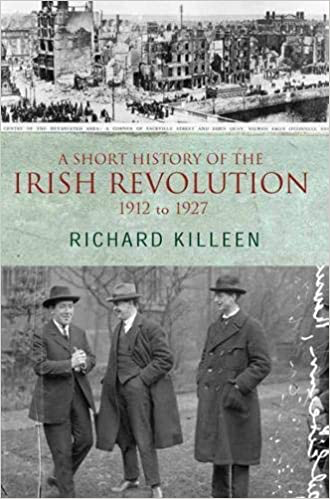 EUR18.99 ($22.98) in stock
By Richard Killeen
The Irish revolution began with the Ulster crisis of 1912 followed by the Irish Nationalist Party securing the passage of the Home Rule Act in 1914. By then, however, the Great War had broken out: the Act was suspended for the duration of the war, with the violent Ulster opposition to it still unresolved. But the war changed everything. Over thirty thousand Irish troops died. A radical nationalist minority rebelled against British rule at Easter 1916, an event that established itself as the foundation date of a new, more assertive nationalism. In 1918 Sinn Fein supplanted the old Nationalist party and formed its own assembly in Dublin. At the same time the IRA began an armed campaign against British Rule. By 1922, Britain had withdrawn from twenty-six of the thirty-two counties of Ireland which now constituted the Irish Free State. The Ulster problem had, however, never been resolved. The result was partition and the establishment of two states on the island - something unthinkable fifteen years earlier. The years of the Irish revolution were the crucible of modern Ireland. Richard Killeen's authoritative survey of the period is an ideal introduction to this tumultuous time