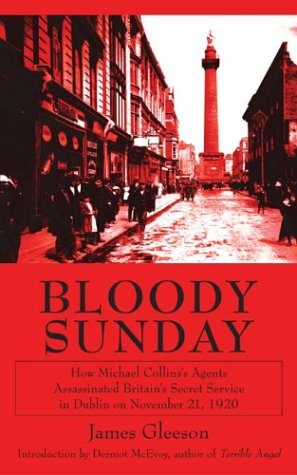 How Michael Collins's Agents Assassinated Britain's Secret Service in Dublin on November 21, 1920
by James Gleeson, Dermot McEvoy (Intro.)
EUR15.99 ($19.35) in stock
This is the story of one of the most terrifying operations ever carried out by one secret army against another. Sunday, November 21, 1920, was a decisive day in the Irish nation's long, bloody struggle for independence from Great Britain. It was on that day that fourteen British secret agents in Dublin were assassinated, an act that shattered the British intelligence system in Ireland and made it possible for a small, ill-equipped force of irregulars to impose its will on its centuries-old oppressor. The operation was carefully and secretly organized, and it was the crucial culmination of a decades-long undercover struggle.
Bloody Sunday tells the exciting behind-the-scenes story of the events that led up to the operation and gives a completely new appraisal of "the troubles." It shows Michael Collins as the brilliant leader that he was, and it disperses the fables and fiction that have grown up around Ireland's War of Independence.
Author James Gleeson saw the "Black and Tans" and "Shinners" in action. He spoke to men who had taken part in the operation-not only the leaders
but also the rank and file-as well as men from the British side. His unbiased, factual account is an extraordinary resource for anyone interested in Irish history.