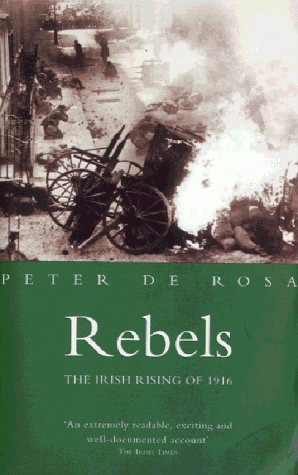 "A WORK OF GREAT DRAMATIC POWER climaxing in the final hundred pages where he writes a full, searing narrative of the patriot leaders' last days . . . It's powerful stuff."
--The Sunday Press (Ireland)

On Easter Monday of 1916, a thousand Irish men and women, armed with pikes and rifles, took over the center of Dublin and proclaimed a republic. It was a rash, doomed, symbolic uprising, and the rebel leaders knew it. Crack British troops killed and wounded hundreds of the rebels in the week of fighting, and British artillery shells left Dublin's city center in ruins.

But the Rising of 1916 was not in vain. The short-lived insurrection and the subsequent executions of sixteen rebel leaders galvanized the Irish people. The overthrow of seven centuries of British rule in Ireland began on Easter Monday, 1916.

In Rebels, Peter de Rosa, author of the bestselling Vicars of Christ, tells the story of the 1916 Rising in all its terror and beauty. With the dramatic flair of a novelist and the scrupulous accuracy of a professional historian, de Rosa brings to life the people, passions, politics, and repercussions of this historic event.