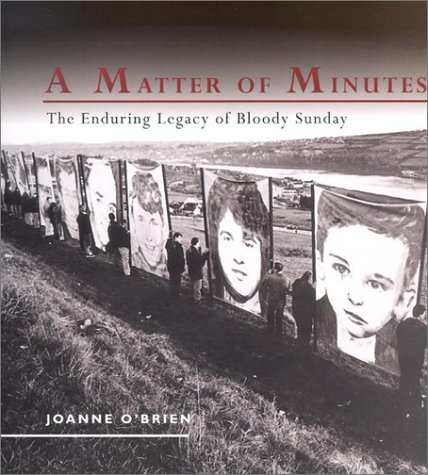 A Matter of Minutes

Legacy of Bloody Sunday
by Joanne O'Brien
EUR11.99 ($13.43) in stock
A Matter of Minutes captures the experiences of thirty-three people whose lives were changed forever by the events of Bloody Sunday. Photojournalist Joanne O'Brien paints a stark and stunning picture of bravery, endurance, and survival-not only on January 30, 1972, but also in succeeding decades that were lived in the shadow of that disastrous day.

On January 30, 1972, Damien Donaghy collapsed on a Derry side-street-not a victim of CS gas nor of rubber bullets, but of the gunfire that pierced the air on that sunny afternoon. In less than forty-five minutes, the city was changed forever.

In an utterly unexpected British Army operation, live ammunition was fired into an unsuspecting and terrified crowd of Civil Rights demonstrators. The horrific and inexplicable scenes that followed claimed dozens of casualties and resulted in the deaths of fourteen civilians.

Disbelief stunned the city of Derry. As the Widgery Tribunal unfolded, hopes for truth and justice were changed to outrage and despair. Three decades later, injured marchers, relatives of the dead, witnesses, and the people of Derry are still waiting for the truth about what happened on Bloody Sunday to be recognized by the British authorities.

The pictures featured here area lasting testament to these people's human spirit and quest for truth.