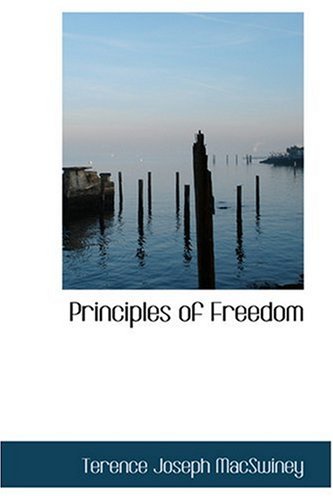 by Terence Joseph MacSwiney
EUR16.99 ($20.17) in stock
It was my intention to publish these articles in book form as soon as possible. I had them typed for the purpose. I had no time for revision save to insert in the typed copy words or lines omitted from the original printed matter. I also made an occasional verbal alteration in the original. One article, however, that on "Intellectual Freedom," though written in the series in the place in which it now stands, was not printed with them. It is now published for the first time.

I wish to make a note on the article under this heading to avoid a possible misconception amongst people outside Ireland. In Ireland there is no religious dissension, but there is religious sincerity. English politicians, to serve the end of dividing Ireland, have worked on the religious feelings of the North, suggesting the danger of Catholic ascendancy. There is not now, and there never was, any such danger, but our enemies, by raising the cry, sowed discord in the North, with the aim of destroying Irish unity. It should be borne in mind that when the Republican Standard was first raised in the field in Ireland, in the Rising of 1798, Catholics and Protestants in the North were united in the cause. Belfast was the first home of Republicanism in Ireland. This is the truth of the matter. The present-day cleavage is an unnatural thing created by Ireland's enemies to hold her in subjection and will disappear entirely with political Freedom.

It has had, however, in our day, one unhappy effect, only for a time fortunately, and this is disappearing. I refer to the rise of Hibernianism. The English ruling faction having, for their own political designs, corrupted the Orangemen with power and flattery, enabled them to establish an ascendancy not only over Ulster, but indirectly by their vote over the South. This becoming intolerable, some sincere but misguided Catholics in the North joined the organisation known as THE ANCIENT ORDER OF HIBERNIANS. This was, in effect, a sort of Catholic Freemasonry to counter the Orange Freemasonry, but like Orangeism, it was a political and not a religious weapon.

Further, as a political weapon, it extended all through Ireland during the last years of the Irish Parliamentary Movement. In Cork, for example, it completely controlled the city life for some years, but the rapid rise of the Republican Movement brought about the equally rapid fall of Hibernianism. At the present moment it has as little influence in the public life of Cork as Sir Edward Carson himself. The great bulk of its one-time members have joined the Republican Movement. This demonstrates clearly that anything in the nature of a sectarian movement is essentially repugnant to the Irish people. As I have pointed out, the Hibernian Order, when created, became at once a political weapon, but Ireland has discarded that, and other such weapons, for those with which she is carving out the destinies of the Republic. For a time, however, Hibernianism created an unnatural atmosphere of sectarian rivalry in Ireland. That has now happily passed away. At the time, however, of the writing of the article on Religion it was at its height, and this fact coloured the writing of the article. On re-reading it and considering the publication of the present work I was inclined to suppress it, but decided that it ought to be included because it bears directly on the evil of materialism in religious bodies, which is a matter of grave concern to every religious community in the world.